Looking forward to seeing you there !

And for the Russian version, here’s the Table of Contents – please contact us for more information.

“A game of Skills” featured on the front cover of the RSA journal (summer 2012 issue); “Tactics for Success” says the article.  Bernie and Charles describe what they mean by Workshift 3.0 – the impact of offshoring and automation, and what Education systems can do to adapt. Download it here: A Game of Skills – Tactics for Success Article.

“Bernie Trilling and Charles Fadel write that increased connectivity, the trend towards offshoring, the rise of a global workforce and the development of innovative manufacturing techniques are all transforming the way we live and work. What skills do we need to thrive in this changing world?”

The National Research Council just published a report: Education for Life and Work: Developing Transferable Knowledge and Skills in the 21st Century that further confirms the critical importance of 21st century skills.  We are strongly supportive of the Deeper Learning nomenclature championed by the Hewlett Foundation.

We are very pleased to announce that, due to growing global recognition of the importance of skills, our best-selling “21st Century Skills” is now available in both classical (Taiwan, white cover; ISBN ：9789866702969)  and simplified mandarin Chinese (red cover; ISBN: 9787806887165;  Title: 21世纪技能-为我们所生存的时代而学习 ) editions! stay tuned for Korean and Russian versions soon.  Let us know if you need help procuring any version, or if you are interested in other languages. And the enhanced ebook version for iPad and Kindle is out too! 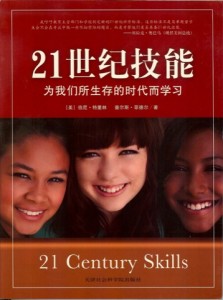 The Pearson Foundation has selected fifty global thought leaders of whom it has asked to write about the “Five things I’ve learned”;

See http://www.thefivethings.org/charles-fadel/ and Charles’s text below for your convenience:

1. Humankind is beholden to its zoological evolution, and needs to educate itself for the world it aspires to.

Clannishness (small group belonging) is hardwired, and so is the privileging of short-term reactivity to imminent danger over long-term proactivity to uncertain danger. The logarithmic understanding of numbers (a diminishing scale) is hardwired as well, blinding us to the power of exponentially progressing technologies. The combination of the three factors makes it very hard, but not impossible, for humankind to act in concert, for its own benefit, to solve global challenges (global warming, financial crisis, etc.).

2. Oversimplifications are legion, and emotions are a factor.

“Schools kill creativity”, “Does Google make us stupid?” are press-worthy attention-grabbers, but the realities are more nuanced, for a world that refuses to deal with its nuanced self. Here too, our zoological evolution influences us by privileging the power of the negative over intelligent discourse. Everyone brings in their own biases to an education conversation (this author included), but most often fail to be aware of them as the biases they are.

3. Conversations about education abound with false dichotomies, and absolutist views, that must be transcended.

The lack of a balanced-conversation mindset leads to many OR debates; for instance:

The balanced reality is that these are all AND propositions, working in concert with each other, and reinforcing each other, in a judicious, impactful feedback loop.

4. Awareness, adaptability, creativity and collaboration are the most important 21st century skills.

In a world of increasing volatility, uncertainty, complexity and ambiguity, our abilities to understand ourselves and each other, adapt and innovate out of problems, and work together in doing so, are key to shaping the future we aspire to. A growth, rather than fixed, mindset (per Carol Dweck) is essential in this endeavor, and so is Wisdom, which has not significantly progressed since the Axial Age.

5. It is grand time to act in a world of possibilities—with courage.

Technology is on the march exponentially, and it is a source of disruptions (via automation and offshorability), as well as solutions and incredible new possibilities—if we leverage it rather than trail it. And we need to summon the Courage within our evolved selves to “think globally, act locally” with a combination of “head, hand and heart” to shape the world we want.

It has become clear that teaching Skills requires answering “What should students learn in the 21st century?” on a deep and broad basis, so that teachers have the time and space necessary for the deep dives via project learning:

The Center for Curriculum Redesign is dedicated to answering the question above and propagating the answers.  Follow its progress and contribute to improving education worldwide.

Listen to the interview at: http://rmartellacci.podomatic.com/

On May 21, Austria’s Kurier published an interview of Charles discussing the importance of 21st century skills, and STEM, at the Federation of Austrian Industries  http://www.iv-net.at/bm50.